The Clark Cabin is available for private rental in the summer, fall, and winter! Inquire about availability via email.

Located in the heart of the Lost Canyon just ten miles northeast of Gunnison, this historic cabin is owned and maintained by the Valley Housing Fund and is available for private rental. The rustic Clark Cabin is completely surrounded by National Forest, and it is a beautiful place for a family getaway, public or private retreat, hunting basecamp, or cross country ski trip.

The cabin is located at 10,000 ft. above sea level in the Fossil Ridge Management Area and is accessible by 4WD vehicles beginning in late May. Access to the cabin during winter months is only possible by ski or snowmobile with permission from VHF, and access is closed from March 15 to May 15 for Sage Grouse nesting.

A maximum of 15 people are permitted on the site at one time. If you are interested in renting the cabin, please contact the Manager at gunnisonclarkcabin@gmail.com with your preferred dates and number of people. All proceeds from the Cabin rental are used for local affordable housing funds, and the suggested donation is a minimum of $100 per night. Please contact the cabin manager at clarkcabingunnison@gmail.com to reserve the cabin.

Please note that there is no running water or solar electricity in the cabin. Along with your personal items, don’t forget to bring headlamps or flashlights. 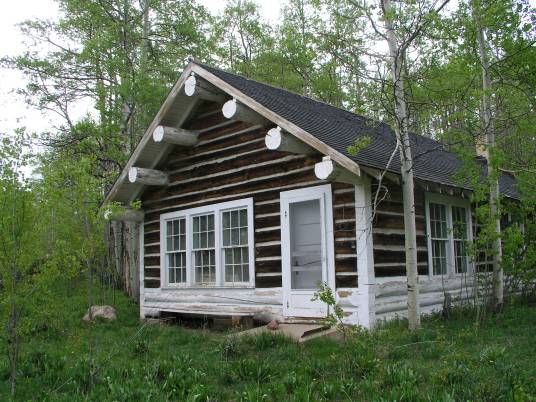 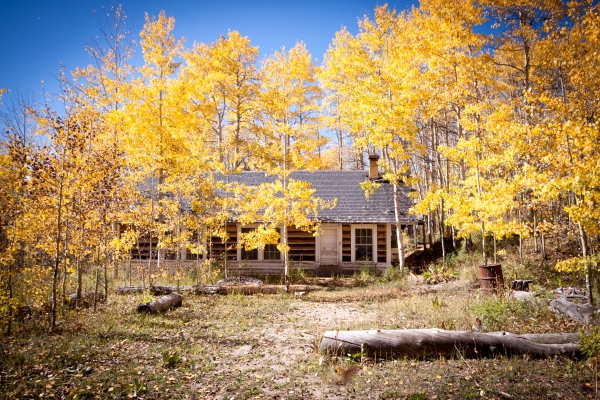 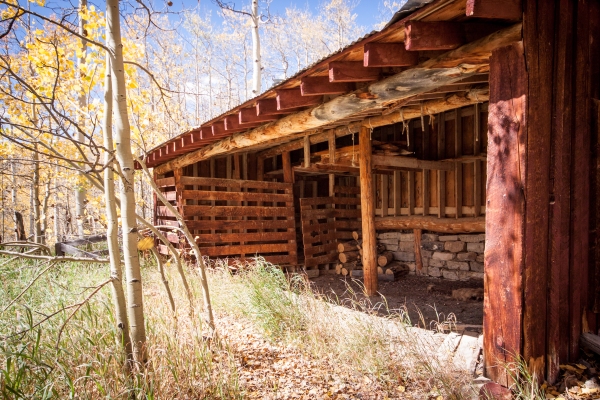 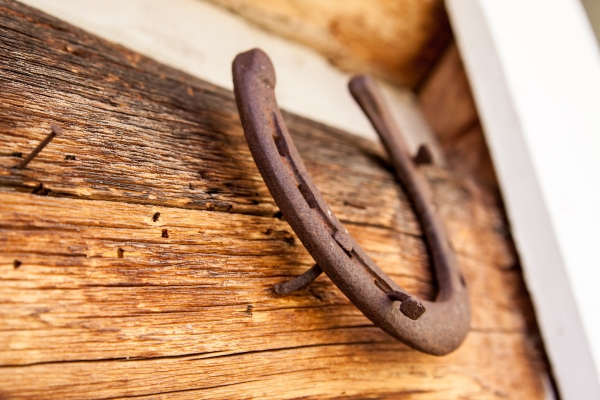 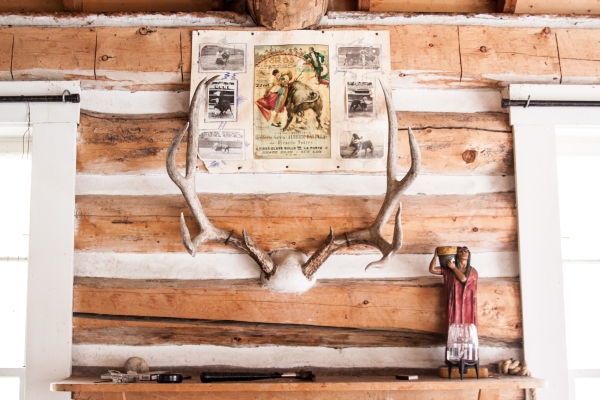 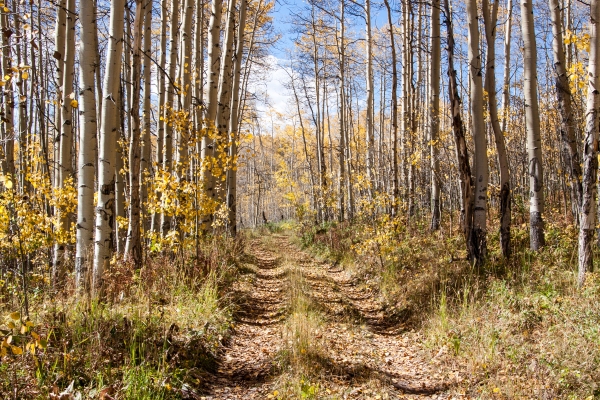 The area around the Clark Cabin was home to a community of miners in the 1860s. These hardy men worked in the limestone quarry and used a lime kiln to process stone for construction materials and concrete. Seventy years later, a local couple named Benjamin and Alberta Jorgensen had a desire to create a mountain retreat to convene high-ranking state decision makers and officials from Western State College (now WSU) to discuss important issues. He constructed the cabin in 1932-33, and it soon became known as the “Governor’s Cabin” due to the high profile people gathering there.

In the 1970s, Butch and Judy Clark purchased the cabin and its surrounding 960 acres with an interest in starting a dude ranch, similar to the one where they first met in Wyoming. However, instead of moving forward with the ranch, they allowed the community to use their property for hiking, hunting, cattle grazing, cross-country skiing, and research. At one point, the Clark Cabin was the venue for local “Midsummer’s Eve” solstice celebrations in the Gunnison Country, following in the tradition of those in Casper Mountain, WY!

Over the years, the booming tourism economy has contributed to a decline in affordable housing and increased development pressure on remaining open space in Gunnison County. Anticipating this dilemma, the Clarks had a plan for how they could protect their land as open space and recreation while also addressing the housing shortage. They approached the Trust for Public Land (TPL) to help realize this vision.

In 2014, TPL helped conserve 331 acres of the property and the Clarks donated proceeds from the sale to the Valley Housing Fund, a local affordable housing nonprofit. Since then, almost the entire 960 acres has been transferred into public lands in the Gunnison National Forest, with the additional proceeds also going to VHF.

The Valley Housing Fund, a 501(c)(3) nonprofit working to increase affordable and sustainable housing inventory in the Gunnison Valley, retains ownership of the 15-acre parcel where the cabin sits. Now referred to as the Clark Cabin, VHF operates the cabin as one of their fundraising mechanisms for affordable housing.

The physical address of the cabin is 8830 CR 743, Gunnison, Colorado 81230. The land surrounding the 15-acre private cabin parcel has been fully transferred to the US Forest Service. Below you will find maps to the cabin. 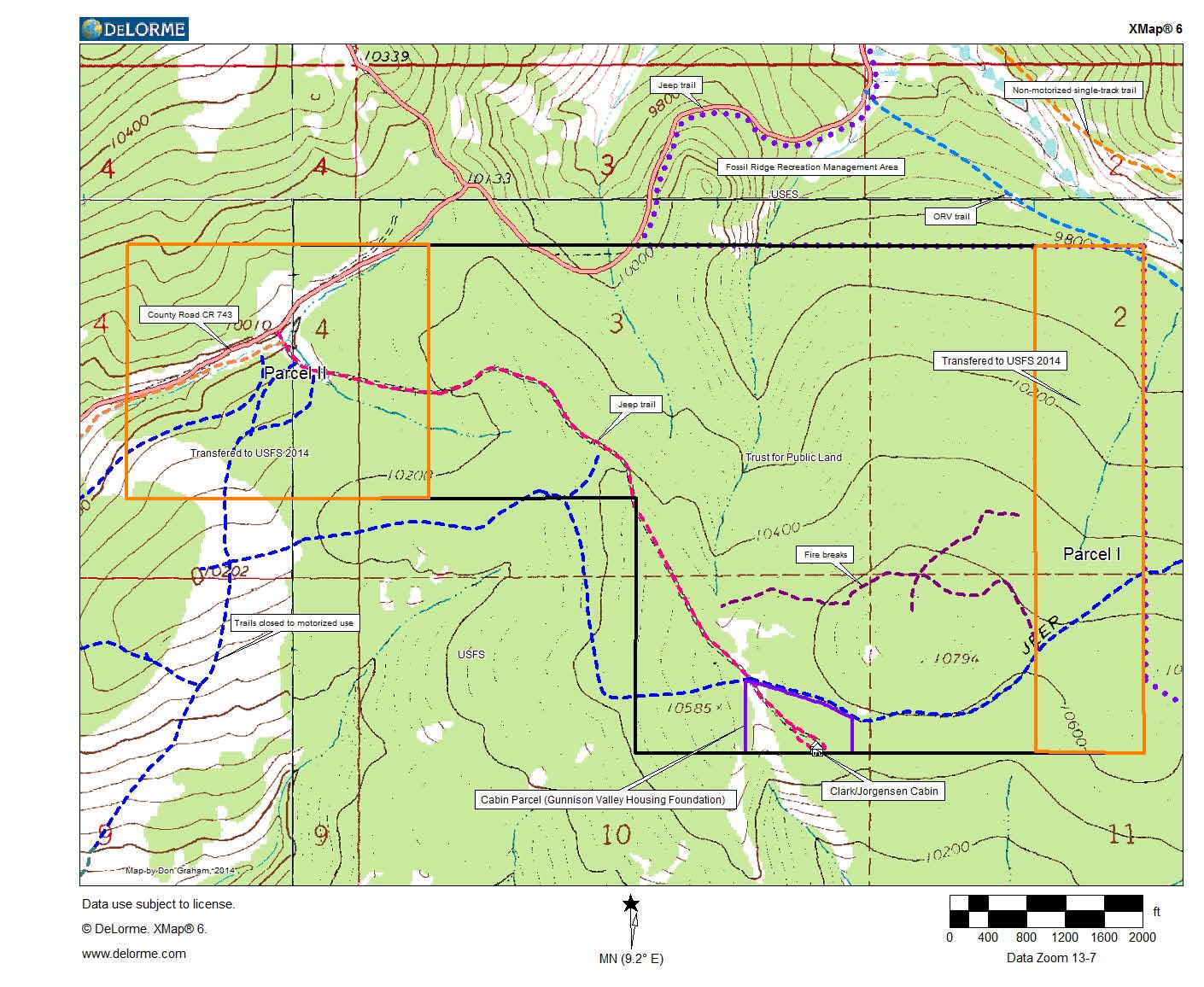 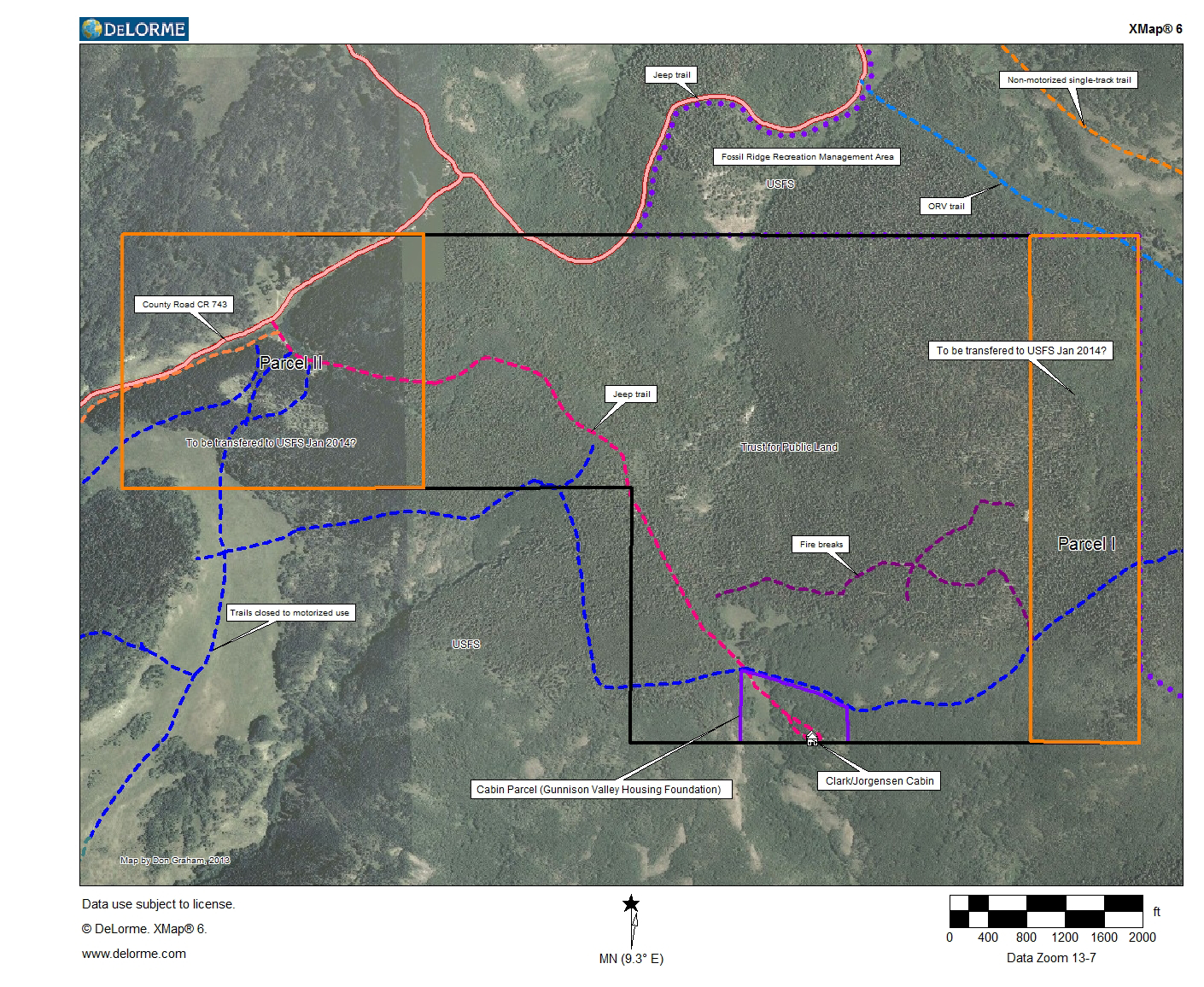 The Clark Cabin and surrounding private property is available for public use with permission from the Valley Housing Fund. If you are interested in renting the cabin or visiting the property, please contact the cabin manager via email.

If you reserve the cabin in the summer or early fall, you can drive all the way there on the 4WD road and park right at the cabin. The road is suitable for most stock SUVs but not AWD cars and wagons. The road typically becomes snowed in starting in late October or early November for the remainder of the winter.

Deer and elk hunting is popular in the fall, and the cabin is an excellent basecamp. Since the cabin is surrounded by USFS public lands, be sure to obtain permits and follow all hunting regulations.